This past Monday night, I came across a CRUFT pile accumulating from an undisclosed member at Artisan's Asylum.

What's CRUFT you ask? Short Story ... CRUFT is essentially stuff (typically old/junk electronics) someone doesn't want. A Cruft hack is the operation of taking said "junk" and turning it into something else, or demonstrating an idea or testing an experiment.

The CRUFTofficial definition from WIKIPEDIA is: "Cruft is jargon for anything that is leftover, redundant and getting in the way. It is used particularly for superseded and unemployed technical and electronic hardware and useless, superfluous or dysfunctional elements in computer software ...

Anyways, I made this: 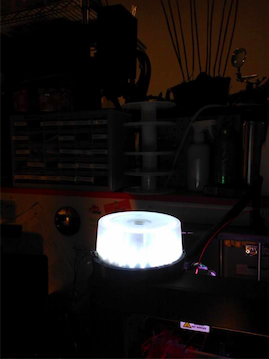 What is it? It's an ultra cheap light diffuser using a plastic CD-ROM holder, and some high intensity LEDs from the lamp below..

BTW: It's CRUFT HACK #1 as I start to document these projects. 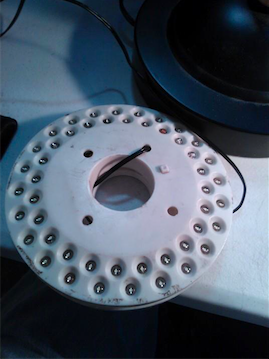 I was told the power was hacked, so I popped it open. I found some crappy electrical tape job, and some twisted cooper attached to the power plug. 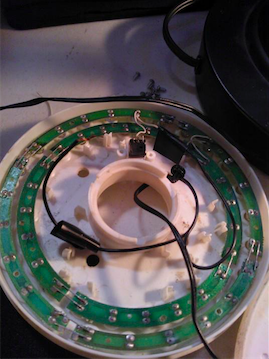 On closer inspection, I found that the circular pattern is actually a custom perf job in ring format. Kinda cool. This hack project could easily be redone with flexible LED strips sourced from someone like adafruit, sparkfun, or maybe a bigger vendor like DigiKey, or direct from source manufacturer.

After removing some screws, and brackets, I removed the two rings from the light, and inserted them into a CD-ROM holder. Luckily they fit without any modification! All I had to do was drill a hole for the toggle switch of the CD-ROM holder.

Then, I tried to power it on. Whola! 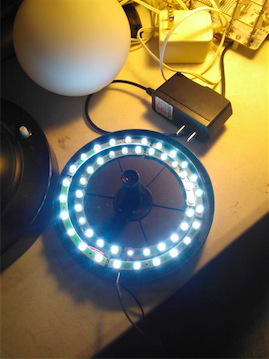 No. That's not wireless power, it's from another project next to it, BTW. ;) 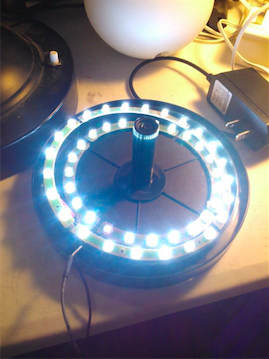 Here are the rings mounted inside the CD-ROM holder. I used hot glue to hold the push button in the drill hole, and also a few dabs to hold down the LED rings.

Here I've added the top to the CD-ROM holder (but haven't sanded it yet for diffusion effect). 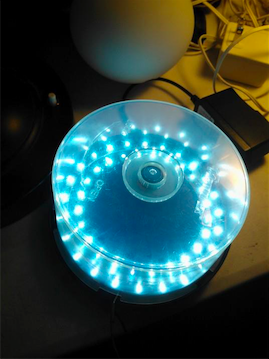 Here's a top view prior to any sanding of the CD-ROM holder. 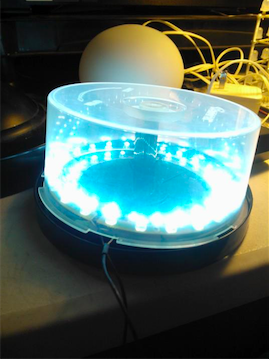 Here's the top view before a lot of sanding. 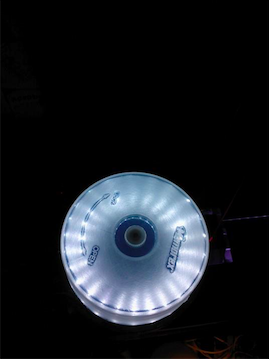 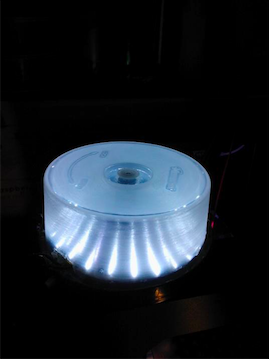 I continued to sand the outside of the CD-ROM holder with some light sandpaper by hand to diffuse the light coming out of the plastic CD-ROM holder. Here's the closest pic to the final result right now.